How Chiropractic was discovered

When was Chiropractic founded and discovered?

Chiropractic techniques go as far back as Hippocrates (460-370 B.C.), Galen (130-200 A.D.).  Even ancient manuscripts of the Egyptians, Hindus, and Chinese reveal some foundations that stem on chiropractic.

Chiropractic was discovered by Dr. Daniel David Palmer in 1895.  He started out as a healer and teacher researching the cause and effect of disease. His first chiropractic adjustment was performed in 1895 on Harvey Lillard, a janitor who worked in his building.

When was chiropractic first used officially?

In September 1895, Mr. Lillard mentioned to Dr. Palmer that he had lost most of his hearing and was almost completely deaf. He said he "could not hear the racket of a wagon on the street or the ticking of a watch."  When asked how he had become deaf he replied that, 17 years before, while bent over in a cramped, stooping position, he "heard something "pop" in his spine" and immediately lost most of his hearing.

Dr. Palmer later noted that he then examined Mr. Lillard's spine, he found a lump on the spine between the shoulder blades.  He persuaded Mr. Lillard to allow him to "rack his bone back into position." Palmer, in fact, thought Mr. Lillard's hearing loss was due to a misalignment that blocked the spinal nerves which control the inner ear, called a vertebral subluxation.   He administered care to the "lump" or  vertebrae  and, after a few days, Mr. Lillard said that his hearing was better and almost completely restored.  Lillard described: 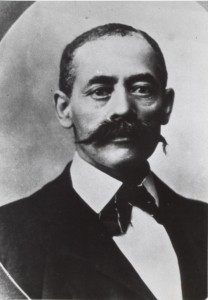 Harvey Lillard (pictured left) quoted after his adjustment:  "I was deaf 17 years and I expected to always remain so, for I had doctored a great deal without any benefit. I had long ago made up my mind to not take any more ear treatments, for it did me no good. Last January Dr. Palmer told me that my deafness came from an injury in my spine. This was new to me; but it is a fact that my back was injured at the time I went deaf. Dr. Palmer treated me on the spine; in two treatments I could hear quite well. That was eight months ago. My hearing remains good. "

Dr. Palmer then began developing his spinal adjustment technique researching and documenting the connections of the spine regarding effects on the organs and systems of the body.  What he discovered was that the whole body is connected and communicate through the brain, spinal cord and nerves. His chiropractic work began relieving many conditions controlled by the nervous system such as headaches, ear infections, immune and much more.  This is also shown in Grey's Anatomy and other medical books as well.

Spinal nerves are a communication system from the brain to the limbs.  Signals are sent up and down analyzing where we are in space, how we move and how organs, glands and systems are operating.  If any of these signals are interfered with, the brain will protect us by either shutting off the area and not allowing it to move or giving us other symptoms of pain, tingling, numbness.  Since the spinal segments house and protect the spinal cord, making sure the columns are functioning properly is key to health and wellness.

Dr. Palmer began to realize that the structure and condition of the spine influenced how the body functioned and its ability to heal all on its own, without the use of drugs or surgery. Because of his results chiropractic grew quickly and started to become recognized.

Why do Chiropractors focus on the your back and spine?

We work on the spine because it holds and protects the nervous system.  The nervous system consists of the brain, spinal cord, and nerves that branch out from the spinal cord. The brain needs to send information in and out. Nerves provide a pathway for this information to travel.  They are literally like roads leading to glands which control your hormones, muscles, tissues, lymphatic vessels and every organ in your body.    Nerve interference can result from any stress.  Stress is the key factor with any condition.  Falls, accidents, emotional stress, tension, or over-use can alter nerve pathways and create lack of function, pain or discomfort in our bodies. Of course, the type of correction or adjustment employed by the chiropractor depends on the condition being treated, the Zone Technique as well as other chiropractic care can help balance your body and help regulate your innate ability to heal all on your own.  Your body knows what to do, sometimes it needs a bit of help and that is what we are here for.

Chiropractic is so successful because we address the source of what is going on and then let the body heal all on its own.

How does our San Francisco and San Carlos, CA Chiropractor get results?

As you know, everyone is different and helping the body heal itself may take time and different factors.  That is why we also provide lifestyle advice to help prevent repetitive stress, illness and injury. Nutrition, exercises, ergonomics and other areas in your life contribute, or diminish, your overall health depending on your choices.  We help and guide you to make the right choices for you to help you live the life you want to live.

The 1918 influenza pandemic recorded deaths estimated at between 20 and 40 million people. Over 675,000 American citizens lost their lives due to this awful epidemic.

The 1918 flu crisis has been labeled in the Chiropractic profession as the reason for our success and proliferation as an occupation.  More states started to license chiropractic after this flu pandemic.  Why? Because data showed huge success of chiropractic care for helping patients recover by boosting the immune system.  Chiropractic adjustments are not just “popping bones” and it isn’t just about relieving pain, it is about total health and wellness by keeping your body functioning at its highest capacity.

How does chiropractic affect your immune system?

The primary purpose of an adjustment is to remove any irritation or interference to nerves.  The brain and spinal cord are the main highway and send messages to the other branches of nerves going off to the rest of the body, including your immune system.  Did you know that there are 5-15 million neurons interacting per minute and the brain has 86 billion neurons alone.  These determine every function and action of our body.   In 1918, chiropractors enabled the body to function as it was designed to do and, in turn, patient’s struck with the Flu were able to regain their health without invasive measures or drugs.

Chiropractors became licensed because of treatment results during the 1918 Spanish Flu:

In Davenport, Iowa, 50 medical doctors cared for 4,953 cases, with 274 deaths. In the same city, 150 chiropractors including students and faculty of the Palmer School of Chiropractic treated 1,635 cases with only one death.

In the same state, excluding Davenport, 4,735 patients were treated by chiropractors with a loss of only 6 cases – a loss of one patient out of every 789.

National figures show that 1,142 chiropractors treated 46,394 patients for influenza during 1918, with a loss of 54 patients – one out of every 859.The medical profession was seeing a majority of the worst of the worst; however, one of the greatest statistics backing chiropractic care comes from the state of Oklahoma. In addition to chiropractors treating 3,490 cases of influenza with only 7 deaths, chiropractors were called in to treat 233 cases where medical doctors had cared for the patients and pronounced them as “lost” or beyond hope. These Chiropractors took care of all 233 with only 25 deaths.

Chiropractic’s journey into health care took a huge leap forward thanks to its incredible effect on the thousands of Americans during the flu crisis. What we need to gain from this is to understand the incredible and sometimes miraculous results of the chiropractic adjustment. When you receive an adjustment there is an increase in immune function, among many other positive benefits. (Journal of Neurophysiology, February 2007).

Dr. Amie Gregory, DC, CCEP and Amino Neuro Frequency therapist is located in San Francisco and San Carlos, CA.  She is ready to help you with all your health and wellness goals! If you are looking for a doctor that understands how your body works and can offer gentle, effective, holistic care, this place is for you! Contact us today!

Find us on the map - Please click desired location below

Office Hours May Change Based On Availabilty

Office Hours May Change Based On Availabilty